Livonia, Michigan, USA
A Proud Chapter of IPMS USA Since 1976

Armor, Racing and Partners in Crime

As you read this, I am doing some work from home and trying to wake up. The past weekend was spent in the Dayton area at Wright Patterson Air Force Base for the annual AMPS National Show. The IPMS Livonia crew rolled out early Friday morning with John Kesner, Tim Howell (from Livonia), Chris Nichols and myself. We were met there by Jerry Fraske, and there were rumors that Mike Anderson was even seen floating around. In the tradition of Livonia road trips lately we took the wifes minivan, dubbed The Silver Bullet, and made our way to Dayton. When we arrived we met up with Greg Hanchuk from Cleveland, who took best Vignette, and members of our Canadian Contingency. This included  Harvey Low who took the Masters award for his scratchbuilt Canadian Lav, and Dave Forest who took Best Brumbar Award. In the tradition of IPMS modeling we went and rang the bell again with multiple golds and one lowly silver. It is a treat to be in the company of so many talented modelers, and again I look at the depth of skills our club posses and could not be happier.

Now when going to Dayton a trip to the air museum is a must. No matter how many times you go you always see something new. Like how the engine set up on a Valkyrie looks just like the Star Wars Star Destroyer engine set up. Funny how we recognize the Star Destroyer engine bank immediately and then when you see it on a plane its almost impossible not to think that had to inspire it.

There were a few beers had, a few laughs had and a few lies and exaggerations told. A good time was had by all. Met up with some of the Warren club, Toledo club, Canadian clubs, and many armor modelers that we have come to know over the years. As most of us have come to find out, the contest is secondary now. The social aspect has become the prime reason for going to the shows. That and looking at models and thinking about buying models. The vendors did have a fair amount of merchandise, but my to build kits is getting so big, I only found 1 thing that caught my eye. Now my model addiction is saving me money because I dont need much anymore. This hobby keeps getting better and better.

To cap off the weekend, John, Tim and myself went to The Mid Ohio race track to watch the GT races. 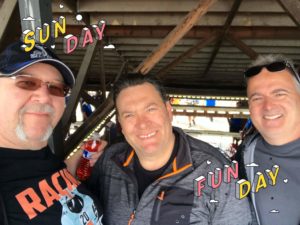 Weather held off and we spent a day at the races. Racetracks are great, they give free hats and t-shirts along with pictures taken with beautiful women. All you have to do is give them all your personal information. You should see how much stuff they gave me.

This Tuesday, that is tomorrow we will be having Model of the Month Contest. Bring out all you have and compete against the other club jokers.

I have included some AK Tech Sheets on several of their products. If you are interested I can put more of these out. Take a look at them and see if you find them helpful.

Still trying to figure out if the new blog format is good or not. I like that we can add more to the website and put content in basically wherever we need it. Feels less newslettery but I will admit I have not had much time these last couple months to focus all my efforts at this so perhaps it is my fault. Looking for any thoughts or input into this process. Thanks one and all.

Lets see if this works

A visit to Wonderfest

IPMS Livonia is an educational organization created to promote and share the art of plastic scale modeling.

Proud chapter of IPMS USA since 1976.